We were one of the first outlets to review the Wii-specific version of Call of Duty: Modern Warfare 3. However, if you look at Metacritic, you’ll see that our overall score is significantly higher than the average. Were we wrong?

To put it plainly, no. But there are caveats, which were noted in our conclusion. Namely, that 9.0 was contingent upon patching for the multiplayer. And boy, did this game end up needing patching (although the same can be said of the PS3 and 360 versions).

If you were a first adopter of MW3 on Wii, you were a beta tester. Oh, the multiplayer ran fine for a few hours on launch night. Then the servers got a little more crowded and the game revealed itself to be buggier than a cheap hotel bed sheet. The “wandering hit boxes” (or “lag shooting,” if you prefer) of Reflex returned, albeit in a slightly tamed manner. Some matches operated flawlessly, while others required shooting three or four steps to the left or right of an adversary to land a single shot. Character animations simply didn’t match up with the programmed hit boxes. However, even if you could get past that, odds are you would still be hit by a nasty data corruption glitch, freezing the game and destroying your progress up to that point. 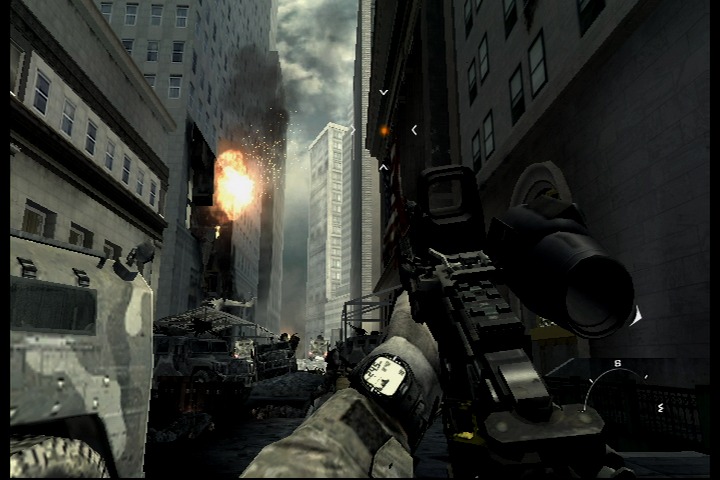 Thankfully, Treyarch patched both problems on 11/17/11, and the game now runs like a first-person shooter worthy of our high(ish) review score. Additionally, a second patch was released on 12/2/11, which provided an optimization and overhaul for framerate drops, hosting latency and host migration (as well as a few odds and ends, like a much-needed “send friend request” option in lobbies). The fixes are certainly welcome, but the game is not yet as patched-to-perfection as Black Ops was. There are still a few ridiculously overpowered weapons: akimbo machine pistols, the Striker shotgun with rapid fire, and quick scoping with sniper rifles is far too prominent to feel anything more than cheap. Also, the the online UI still needs some streamlining (the private message system is a bit clunky, and a region option would be welcome for match making). But even with those flaws, MW3 is still easily in the top tier of Wii FPS. I’d actually put it at the very top.

Why? The controls are masterfully done, as good (or better) as any pointer control scheme devised for the console. There’s a ton of content and game modes to go around. Graphically, the game shines, splitting the difference between the detail of GoldenEye and the scope of COD. Don’t believe some of the odder and more obtuse critiques of this title’s presentation. No, MW3 on Wii doesn’t stand up to the versions on the PS3 or 360, but it is a fine looking Wii game. It basically looks like a very pretty effort from last gen, but with a much bigger scale and much more complex level geometry. If Wii ports had looked this great all along, there would be far fewer complaints about “Wii goggles.”

[Ed. note: The pictures you see in this article are used with permission from MiniDitka, of the forums from neogaf and IGN.  They are snapshots from the early going of the single-player campaign, which are a little dark on Wii.  The game fares much better a little deeper into the campaign; the multiplayer, against all odds, manages to maintain the higher standards of the offline portion.]

After hitting my first prestige (and achieving my first – and most likely last – MOAB), I can say that the overall map quality is not quite up to par with the best of the series. There’s nothing bad here, but it’s all a little too dense, and after you’ve put in 20 to 30 hours, you will notice the lack of open spaces. The original Modern Warfare still has the best maps that any COD has seen, but the finale of the trilogy still has some real highlights. Downturn, Fallen, Seatown and Underground offer routinely spectacular shoot outs. 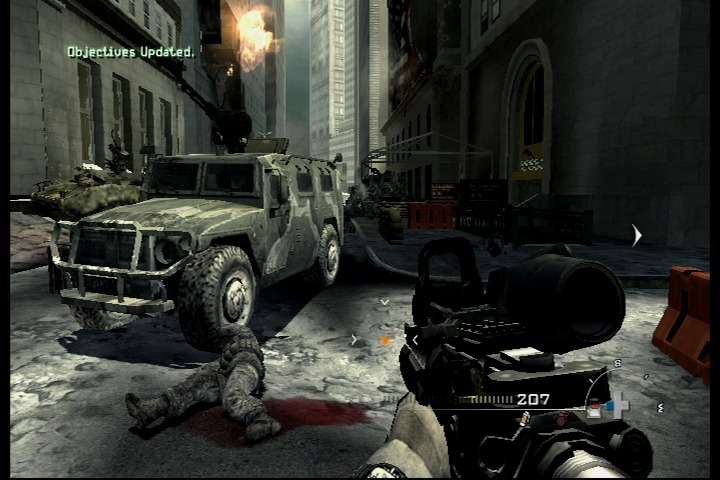 Lastly, for a big, flashy production that aims for Bruckheimer thrills, it’s surprising how deeply you can tailor your own experience. The minutiae of this COD is almost overwhelming. Customization isn’t just for camo skins on your weapons; the “play how you want to play” ethos bleeds into nearly every pore of the game. Proficiencies alone (unlockables that allow you to, for instance, give your weapon greater effective range, or less recoil) are a fantastic addition to everyone who geeks out on customizing their weapon of choice. But for my money, the most meaningful additions are for perks: the ability to pull up your sites faster (quickdraw), and to also move faster while aiming down your sights (stalker). Whereas assault rifles were always a “do it all” weapon in the single-player campaign, they are now truly a jack of all trades in multiplayer. If one adds the range proficiency with the aforementioned two perks, you can have an assault rifle that gives you a fair shot at distance against light machine guns, as well as competitiveness against sub-machine guns at close range (provided you go ADS while turning around corners), plus the usual mid-range dominance you’d expect from the weapon class. Don’t let the M4 carbine fool you by being available so early: it’s a deadly and elegant weapon with the right attention to detail.

In my view, MW3 caps off a remarkable run by Treyarch on Wii. They’ve both created and ported the most consistently good FPS games on the system, bettering themselves with each outing when other developers either stopped caring or never bothered to in the first place. Despite a few hiccups, like the previously mentioned over powered weapons (although it must be said that, on the whole, the weapons here are more balanced than in Black Ops), MW3 is a great ride, with an overall graphical presentation that’s the best it’s ever been on Wii. With another patch or two, the only flaws the game will truly have will come down to personal preference (mainly, the dense maps).

Don’t be fooled by some of the flat-out bizarre reviews Modern Warfare 3 has gotten for Wii. It’s one hell of an FPS sendoff for the diminutive-white-box-that-could, and the recent patches more than validate an above-average overall score for the game.

Forward to the Sky review for Nintendo Switch | An overpriced mess

The Nintendo Switch is saving the environment, apparently