There is a moment in The Legend of Zelda: Skyward Sword, at the close of the first act, which encapsulates the entire experience. A masterful boss fight is followed by a quiet and beautiful lead-in to a cut scene, one that kicks the story into its next gear. This is executed without flaw, save for a clumsily-timed bit of item acquisition.

And that is Skyward Sword, in a paragraph — a prodigious showcase of Nintendo’s most ingenious gameplay ideas, besmirched only by the slightest shadows of their own past designs that the company hasn’t quite outrun.

In the main, then, I agree with Juegosmajicos’ wonderful review of the game. But I have my own loves and quarrels with this Zelda! 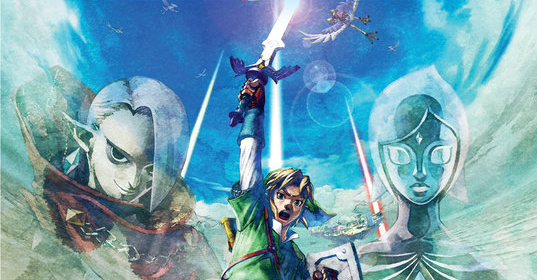 It works. That’s all you need to know.

If you’ve been waiting years to find great motion-controlled swordplay in a game of immense quality, wait no longer. Skyward Sword makes good on the potential of motion controls that has only been hinted at in the past (Wii Sports Resort was a glorious demo with its jousting, while Red Steel 2 featured intriguing controls married to a fun, but vanilla overall experience). While the game features 1:1 tracking while you adjust the angle of Link’s sword, attacks are trigged with specific slash angles in eight directions. Think of it as “practical.” You can slash vertically up or down, horizontally left or right, or diagonally. There is also a sword stab, the trusty spin attack and the Skyward Strike (a projectile sword blast triggered by “charging” your blade by holding it skyward). That’s a total of 11 attacks, excluding the shield bash, jump attacks, finishing blows and projectile weaponry. The only iffy one of the lot is the stab, which can  occasionally  suffer registering properly in hectic battles.

If this sounds overwhelming compared to Zelda’s usual lock-on, attack, win formula, trust me, it’s not. It’s completely natural, and the best use of the Wii remote ever devised. But the development team didn’t stop with fantastic sword controls: they’ve mined the depths of the Wii’s library and have been tasteful thieves in their plagiarism (one example: Wii Sports Resort’s basketball gets an explosive makeover).

Another area that has seen significant revision is the menu interface. Instead of pausing the game and searching through inventory, Skyward Sword offers a simple, yet refined alternative: you need only hold down a button (which brings up a transparent menu screen) and move the Wii remote in the direction of the item you’d like to equip. There are two of these menus, one for the main tool set, the other for secondary items (mainly potions). There is no jittery infrared pointer involved here; you simply hold a button to bring up your menu, “snap-to” the item you wish to use with a gesture in the proper direction, and release the button. It’s simple, seamless, and a long-overdue addition to a controller interface that had been growing long in the tooth.

The controls are unleashed in a digital playground that features a revised progression structure: density is the order of the day here, and you will not simply walk through empty fields in order to get somewhere. This playground is also, at least in small part, a lovingly-crafted pastiche of Zelda’s mascot stable mates. You will rotate parts of locks in order to solve puzzles; but this isn’t Metroid Prime 3. You will skip among rocks in the sky; but this isn’t Super Mario Galaxy. You will crawl through tunnels, emerge into your usual third-person view, and then switch into first-person perspective to search for environmental hints; but this isn’t Metroid: Other M.

Initially searching each nook and cranny of the game’s locales will impart a slightly cramped overall feeling. But you will find intersecting pathways within each location, making the total size of this incarnation of Hyrule suitably spacious. Re-traversal is common, but you’re usually opening up new, heretofore inaccessible areas each time you visit familiar ground. Twilight Princess might have been a bit larger, but there is very little wasted space in Skyward Sword.

The main complaints I have (outside of the stab motion) are small, but noticeable. Firstly, the lands below the sky aren’t interconnected at all. If you want to visit another area, you must go back to the sky first. This seems like a step backwards after the warping ability introduced in Twilight Princess. Secondly, some later boss fights forfeit elegant combat in lieu of flailing. Lastly, this Zelda has an annoying habit of constantly replaying Link’s “Look at what I just found!” moment. You know the one: our hero finds a rupee or a bug, and we’re treated to a brief interlude announcing exactly what you’ve just picked up. I reiterate: this is a small complaint. However, when you’re playing a game for 50+ hours, odds are that you don’t need to be reminded how much a red rupee is worth every time you pick one up.

But beyond these minor quibbles, there is a propulsive momentum to this Zelda. You will simply want to press forward to see what the plot has next in store for you.

If you’ve never played a Legend of Zelda game before, you’re in luck. Skyward Sword is the origin tale for the series’ larger canonical mythology.

If you’ve played every other Zelda game, you’re also in luck. Skyward Sword helps make the rest of the series make sense.

As detailed in my original first thoughts, this tale opens with young love. If it did not, there would be much less incentive to dive from your beautiful homeland of Skyloft to reach the corrupted lands below the clouds. Link follows not simply because he is a hero (in fact, the strongest example of character development in this game is Link’s growth into being the hero he was born to be), but because he loves Zelda. Why else risk life and limb in the dangers that await? Sure, there are some pesky ne’er-do-wells that offer grade-school hazing and bullying in Skyloft, but nothing like the devious Demon Lord roaming the lands below.

Ah, that Lord Ghirahim. What a cad. Who knew that the best villain that the series has seen in years would look like the zombie corpse of Freddie Mercury? It’s actually a bit unnerving to see such a flamboyant and unhinged antagonist appear in a Nintendo game. Yes, Ganon has always been a fairly bad guy in previous installments, but Ghirahim is so bad that he’s actually endearing (like Hannibal Lecter in spandex). His goal isn’t one I should ruin in this review, but suffice to say it is as dastardly as you’d expect, and he will end up tormenting poor Link all along his quest.

And what a quest it is. I spent north of 55 hours playing Skyward Sword. Admittedly, this is less time than I spent in my first play through of Twilight Princess, but there’s rarely a dull moment. If you’ve read comments claiming that this Zelda is one long fetch quest, you’ve read comments that don’t realize that the original game in the series was nothing more than a fetch quest for eight shards of Triforce. Yes, you will need to go find items in order to progress, but they are nothing more or less than tasks for our hero to perform. Saving the world requires more than boss fights.

This isn’t to say there isn’t down time. If you want to explore, you certainly can find the time. There are materials to collect, bugs to find, favors to provide and characters to talk to. One area I differ with Majico is on non-playable characters; there is precious little to the majority of these NPCs outside of your initial first impressions and their gratitude for being helped by said favors. However, there is some real depth to those central to the plot, which is most welcome. Link and Zelda are, of course, at the fore. They are children carrying adult-sized burdens. As such, they require a bit of help from some “new” characters. Some I cannot comment on, lest I spoil a few wonderful revelations. However, if you have looked at any of the game’s concept art or screen shots, you have no doubt seen Fi in her purple and blue glory. She plays the ever-important role of Link’s guide, in addition to being an integral part of the plot. While not as annoying as some previous companions in the series, she isn’t as well-developed as Midna. That said, by the time Skyward Sword’s final chapter closed, I found her to be endearing.

Continue to Page 2 and the Final Score.

Forward to the Sky review for Nintendo Switch | An overpriced mess