VII. Welcome to the dramatic End Game, which lasts about 40 hours.

I took a small break after Prison Island. Mainly because the brief path you’re directed to from Makna Forest into Valak Mountain had some enemies that wanted me to be highly dead. I built a bridge for some Ewoks and filled in the Makna map, instead. Of course, there are no “small” breaks in Xenoblade. During this playthrough, I usually started playing at about 8 p.m. After doing some more odds and ends in Makna, it was past 11 p.m. So I thought “ah, I’ll go to bed and play a little bit tomorrow in the new area.”

Which was a stupid idea.

I ended up starting early after work the next day, at about 5:30 pm. My first steps onto Valak Mountain were, well…disappointing. The topography is super steep, the camera gets a bit wonky trying to traverse the land, and although I love snow areas, this one seemed somewhat tame and bland. Its defining feature was “hey, look how steep I am.” Of course, this being Xenoblade, the odds of amazing and breathtaking sights appearing increases exponentially once the sun goes down. 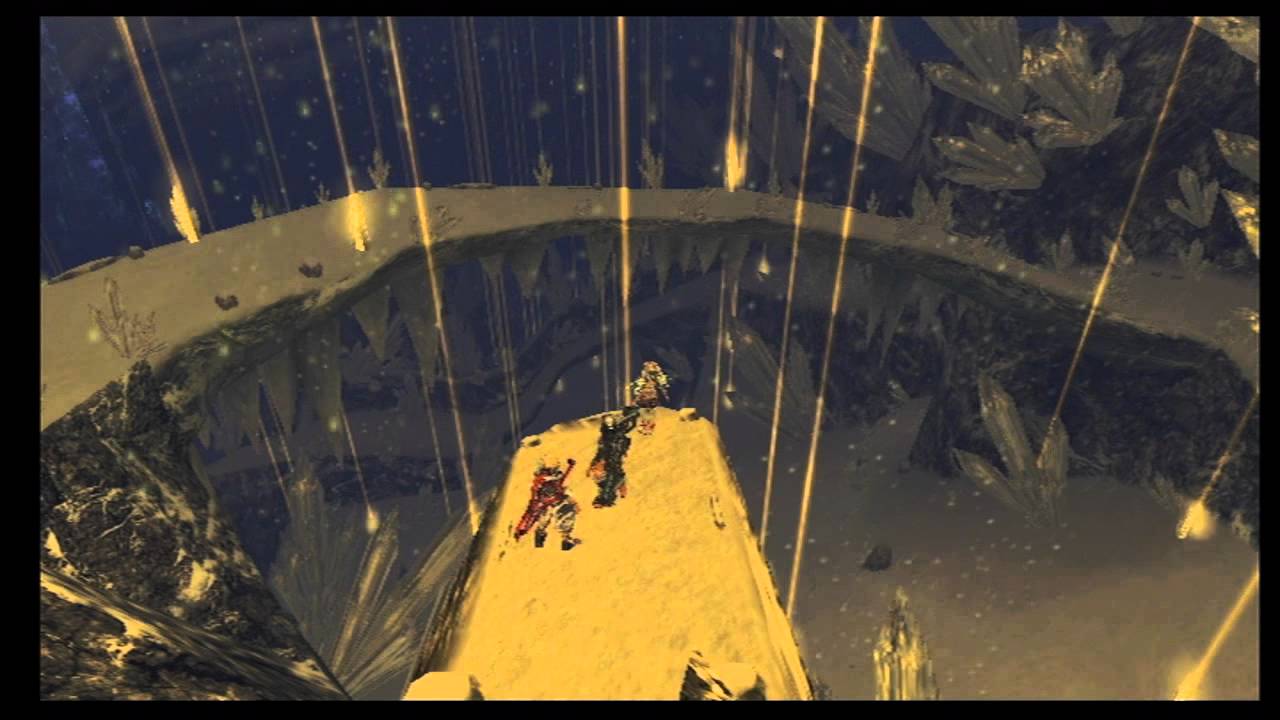 I mean, sure, why not have gold light beams shoot up from the ground into the sky? And why not have grazing deer-buffalo creatures whose antlers actually freaking glow at night and give off particle effects? Why not completely transform an area from a somewhat boring, windswept mountain pass during the day into an acid trip at the North Pole at night? At this point, Monolith is showing off. They’re dropping Phendrana moments like they’re a dime a dozen instead of once-in-a-generation occurrences. Valak isn’t particularly huge by this game’s standards, but I stuck around for a few hours because…I mean, look at it. Alvis (the aforementioned Bon Jovi roadie who saves the party’s bacon after the Xord fight) takes you to a temple hidden deep in the mountains. You learn about seers there (Alvis is one himself), you explore, day turns into night. Twice. You hit plot. Boy, do you hit plot. Slight difficulty spike, frustration, grind, defeat the boss, and yeah, it’s 2 a.m. again and I have to wake up in 4 hours. How have I been playing this long? After that plot, I should definitely go to bed, because that’s a lot to process. The face Mechs aren’t a secret anymore – their ingredients mirror that of Soylent Green.  Mumkhar (a Homs veteran who fought alongside Dunban) has turned himself into an irredeemable asshat by joining their ranks, becoming Metal Face in the process. Remember, it was Metal Face who killed Fiora – who shockingly appears now, on Valak Mountain, as a half-machine within her own Face Mechon. Fiora isn’t dead, she just isn’t Fiora. Well, except when she is Fiora…

But I’m an idiot. So I press on. Because it’s actually happening – we’re off the Bionis. We’re going to Mechonis. To save Fiora, who had just been whisked from our grasp. Finally.

And it’s a bit of a disappointment. Sword Valley blown up to a 1080p screen is a mess. I was shocked how well Xenoblade had held up until now, especially in Makna Forest (which, despite some pop-in, was a real visual treat), but Sword Valley is the point at which time finally catches up to the game. Which would be OK, were the level itself well made and interesting. It isn’t. Ramps, ramps, more ramps, blurry ramps, the odd hideout with a quest to beat a high-level Mechon. There is definitely a feeling of danger, a little bit of horror (the Mechon are draining the blood/ether from Bionis for their own ends; this is some creepy ish), and that carries this level quite far. But now I have to wake up in 2 hours.

Fast forward through a day of work in which I dragged ass like a paraplegic burro, and I’m back at it. I’m closer than I thought to really getting through the area. The final boss here against that bastard Mumkhar was, charitably, a cluster of fornication. Again, time catches the Wii. There’s enough slowdown in this boss fight (granted, featuring multiple giant Mechon) to drag the framerate into the teens – if not lower. I died – not due to underleveing, but due to this fancy moving picture show that I was tangentially connected to with a videogame controller. The payoff after trying again and a victory, though, is that…I kinda like Shulk. I mean, he’s a damn mark. But Takahashi is underlying just how good he is and how connected he is to his people. There is no reason for Shulk to step between Dunban and Mumkhar, but he does it, anyways. He can’t bring himself to kill a Homs – an erstwhile ally and friend – from Colony 9. This all could have come off terribly for a character that was skating the edge of being the annoying JRPG lead trope. But I thought it worked. Shulk is a good guy. Dunban is the wise one who insists on doing what must be done. There’s balance here amongst the cast, which is why none of them feel tacked on or useless.

Ah, what hell, it’s only midnight, might as well go to the next area. Galahad Fortress is a touch generic, but fares far better than the early section of Sword Valley. Impressively, the feeling of danger still hangs a bit in the air. It feels like you’re somewhere you definitely should not be. And it’s time for bed again, because somehow it’s 3 a.m.

OK. So, by this point, Xenoblade has destroyed any semblance of a sleeping schedule or social life I may or may not have had. Even at a point when the technical faults are piling up, it doesn’t matter. The JRPG switch has been firmly flipped, and we’re in a full-on rush to save Fiora – and the Bionis, if we can manage it. And for once, there isn’t much waiting for the next big thing. Turns out Galahad Fortress is more like Galahad Bank Vault. Sure, grinding levels on Mechonis droids stashed in what seem like big pantries is good fun, but there’s not much more to it. We’re in a fight against multiple mechs trying to save Fiora in short order. It is, unfortunately, another slide show. And Reyn cannot figure out what he’s supposed to attack. Also, the Z-target kept flipping of its own volition (not the last time this would happen). Mechanically, Xenoblade is getting a bit too ambitious with its combat desires for its hardware reality. Still, it’s tolerable, and we finally seem to be where we have wanted to be since Colony 9, since the invasion, since the flicker of hope on Prison Island. Saving Fiora.

Except, yup, JRPG switch isn’t done with us. Before there is a moment to breath, it’s time for another boss battle – and the world truly flips on us. We had seen glimpses of the Gold-faced Mechon before – we even got the name Egil on Valak Mountain – but now he’s bending Fiora to his will and rendering the Monado useless. And without the ability to cast an Enchant spell, that means combat itself is useless at this point. No matter, we’re saved by that strange red glow emitting from Fiora…

But we fall. Far. We had worked so long and traveled so far to infiltrate the Mechonis, but one wrong explosion now flings us from its depths to a…beach? Why, yes. Now, Xenoblade officially gets back into its element – a fantastic setting with a prime view of both the Mechonis and Bionis. Our landing spot from the Mechonis is the giant mech’s own Fallen Arm. We knew the Mechonis had lost its arm from the opening cinematic, but Monolith being Monolith decided, “yeah, we have to use that.”

I don’t know how many hours have passed of me playing by this point. I’m now playing to the point of birds chirping outside to introduce the morning. I don’t want to stop playing, I want to keep-