The High Entia picked the wrong time for a counter-attack. All of that cloak and dagger, cut-scene drenched politicking back in Alcamoth? After much hand wringing, they finally put their butts in gear to strike back at Egil. Their reward? Egil reawakening the Mechonis, moving what was moments-ago Sword Valley back into its place as a cutlass of the gods.

If you’ve played games long enough, you’ve experienced more than your share of “I can’t believe that happened!” moments. This, though? The Mechonis, living once more, destroying a huge level you had been on mere hours before? For me, I put this near the top of mind-blowing, only-happening-in-videogames lore. Xenoblade, for all of its scale, is not really an open-world game. But it feels bigger than nearly any other adventure I can think of, and it’s because of this sort of moment. This game has you exploring living continents, living worlds.

When we last left our party, they were being held in mid-air by Meyneth. However, her strength isn’t what it once was, and she can only hold on for so long. Thankfully, Miquol (the king of the Machina, who we met on the Fallen Arm) arrives to break our fall. It turns out Alvis came to warn them. He’s a seer, remember? Funny thing how that guy always turns up at these pivotal moments.

…this has been a lot of plot lately, hasn’t it? Well, there’s gonna be more. The JRPG switch is real, my friends. At this point, some 70-hours into the game, Xenoblade has begun to deliver on every secret it has been keeping. You can always step aside, do some heart-to-hearts, visit prior areas, but Monolithsoft has structured the game in such a way that it’s hard to look away from the prize by now. We are, of course, not out of extraordinary sights. Once landing back within the Mechonis, you are directed to the central Apocrypha Generator (which needs to be destroyed, as it has been running a sort of interference to keep the Monado below full strength) via a narrow passageway. But below that? Oh, just the entire central factory that you passed through hours earlier. And no, it’s not merely a picture; you can go down there and explore the whole damn area again, if you’d like. If you needed reminding, this game tosses out vistas that would be highlights in other games like they’re nothing. By this point, I’m numb to it. I expect grand views of stupendous landscapes within mythical realms. It’s a low-resolution Wii game, but I don’t care. I’ve never felt a world this imaginative feel this cohesive. I went for a quick visit to the central factory, in all of its steamy, rusty, glowing-orange glory, because I could.

So, who likes boss battles? The Apocrypha Generator itself is a boss. Destroy it, restore the Monado’s full power, and you…go to fight Egil in his shiny Gold Face Yaldabaoth. Wear him down and you are rewarded with…mini-bosses. They completely surround Yaldabaoth, which activates a challenge (knock out three power generators while those high-level mechs try to make you very dead). Shulk sees a vision of the Mechonis delivering a death-blow to Bionis, so you have to make quick work of them. Defeat those mini-bosses, and you can go back to actual-boss Egil, who – mercifully – should be near defeat by now. By the way, this whole scene? Takes place in the eye of the Mechonis with a view out to the Bionis. Melia can literally see her house from there. How’s that for scale? This is really a tiny arena fight on scaffolding, but it feels like so much more. The areas we are watching from the eye are places we explored.

Defeating Egil creates a bigger problem for poor Shulk. A voice awakens with him, much in the same way Meyneth’s voice awoke within Fiora. Egil, for his part, gives us a plot dump. He was once friends with Arglas, who would go on to wield the Monado. Its power, and its will, overtook Arglas. And then, the real bombshell: “The Monado is Zanza.” The vengeful deity of the Bionis merely uses its inhabitants as temporary physical repositories, while the blade houses his soul. But Shulk? He’s different; he hasn’t fallen to the Monado, to Zanza. Maybe peace is an option? At this moment, it looks like we’re about to see the credits roll. Then Dickson, shady through the entire game, shoots Shulk and reveals not only his true colors, but Shulk’s. Dickson? A disciple of Zanza in disguise. Shulk? The moment he touched the Monado, he effectively became a shell; Zanza’s soul resided in him in a dormant state. With the elimination of Arglas’ flesh, and Shulk maturing to master the Monado’s arts, Zanza fully awakened. In a blinding light, he was reborn. Mostly. You see, as a creator god, all living things must return to him in order for him to be whole. That includes the world and beings of the Bionis itself. Zanza is bent on annihilation.

But if Zanza needed a host to get to this point…well, you can fill in the blank. So did Meyneth, who has been living within Fiora. Which means Meyneth has been concealing a mighty weapon – her own Monado.

Oh, you thought we were done with boss fights? Of course not. Next up? 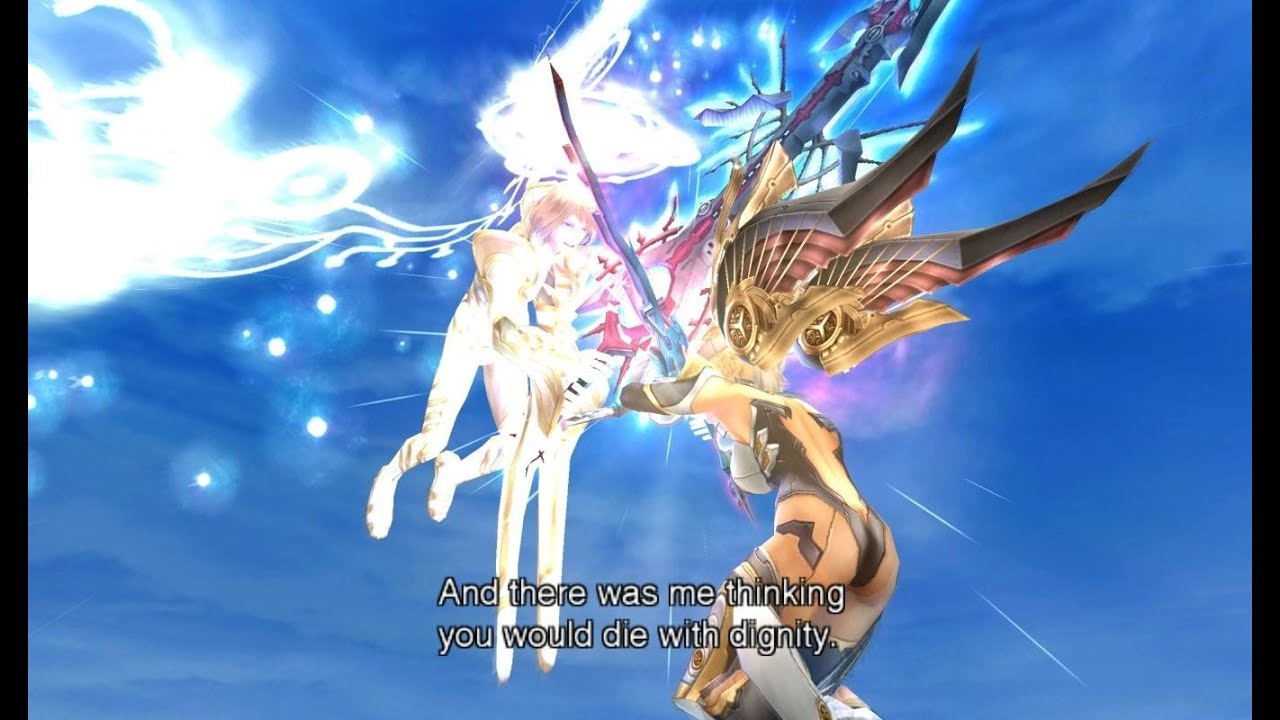 Aaaaaand it’s a let-down. Back in Agniratha, bosses were a dime a dozen, the best of them two-part affairs. Fiora/Meyneth vs. Zanza is over in under 5 minutes, and it’s a crying shame. The incarnate forms of Bionis and Mechonis are in a brawl, and this is all that we get? We’re back in a cut scene before we can even get through a cooldown for all of the arts in our arsenal. Meyneth was apparently not fully healed or at full strength, but she separates from Fiora (to take her true form) as a last ditch effort to save whatever still lives inside Shulk, who is the only being who has shown the power to resist Zanza.

Meyneth dies, as much as a god can die in this world. Zanza inherits her Monado and bends it to his own design. Our party makes for their ship and escapes – right in time to watch the Mechonis, that beautiful robot that was such an amazing experience to visit, fall into a pile of debris. Ruined. At this point, it kinda looks like things are about to get out of hand.

I need time to process all of this. Hopefully we can land the ship and talk this over – wait, why is there another boss fight starting?