XI. A capricious god, a dead boy, and a computer walk into space.

Give Zanza one thing: he’s one hell of a strategist.

The High Entia, who he bestowed with the intelligence to partially imprison him? He also cursed their genetics with a hideous, latent form – Telethia. An over-exposure to ether, and voila, a carnivorous killing force that will return all living beings to the Bionis. Upon felling the Mechonis, Zanza has to barely lift a finger to destroy all life, returning him to his former strength. By claiming Meyneth’s Monado, he now only has to wait for omnipotence while safely ensconced within Prison Island, which he has buried into the Bionis itself for safe keeping.

It is a Telethia that greets us upon escaping Mechonis. With Shulk incapacitated, we are no match for it, but the intelligence of the High Entia is not so easily subsumed. Melia’s brother, freshly transformed into a Telethia, uses his newfound powers to grant our party room for an escape. As for Melia? She, and all other High Entia of half-Homs lineage, don’t have the genetic time bomb within them.

While Shulk heals up with some help from the Machina, and Fiora (now dying without Meyneth’s sustaining power) copes with her fate, Alvis foreshadows the penultimate plot dump. While the rest of the survivors wish to go to war with Zanza, he doubts the wisdom of it. Can resisting god achieve anything? Whether they fall in battle, or in old age, they will invariably die, returning to the Bionis. To Zanza, the end-result is not only the same, but necessary. If no life returns to the Bionis, there is no Zanza. However, there is a vulnerability to the gods. A soul, even a god’s, cannot perpetually exist in a vacuum – that is why Zanza and Meyneth took physical forms at all. Flesh, even god-made-flesh, is still vulnerable. And Shulk, who learned how to see and change the future through the Monado, is a unique threat to Zanza. How omniscient is god if the fate he has prescribed can be thwarted by a mortal?

You need a beer? I need a beer. Takahashi-san has turned the theology knob past 11, but thankfully this section is winding up. Dickson, with a squadron of Telethia, has discovered our band back in their hiding place at Colony 6. Shulk wakes up, grabs a Machina-made replacement Monado, and joins the fight. More importantly, he now sees the future without the real Monado (turns out that the sword of god was a means to an end, not an end unto itself). The Telethia fall, and fall, and fall, in a marathon of boss fights. Then Alvis makes good on his earlier ruminations on the divine, and sides with Zanza. He and Dickson flee to Prison Island, now within the Bionis. However, that’s not as well hidden a place as it sounds. Egil, in one last act of redemption, had used Mechonis to punch a hole in the Bionis. And so we go to meet our fate, in the chest of a mad titan. Yes, that is as awesome as it sounds. 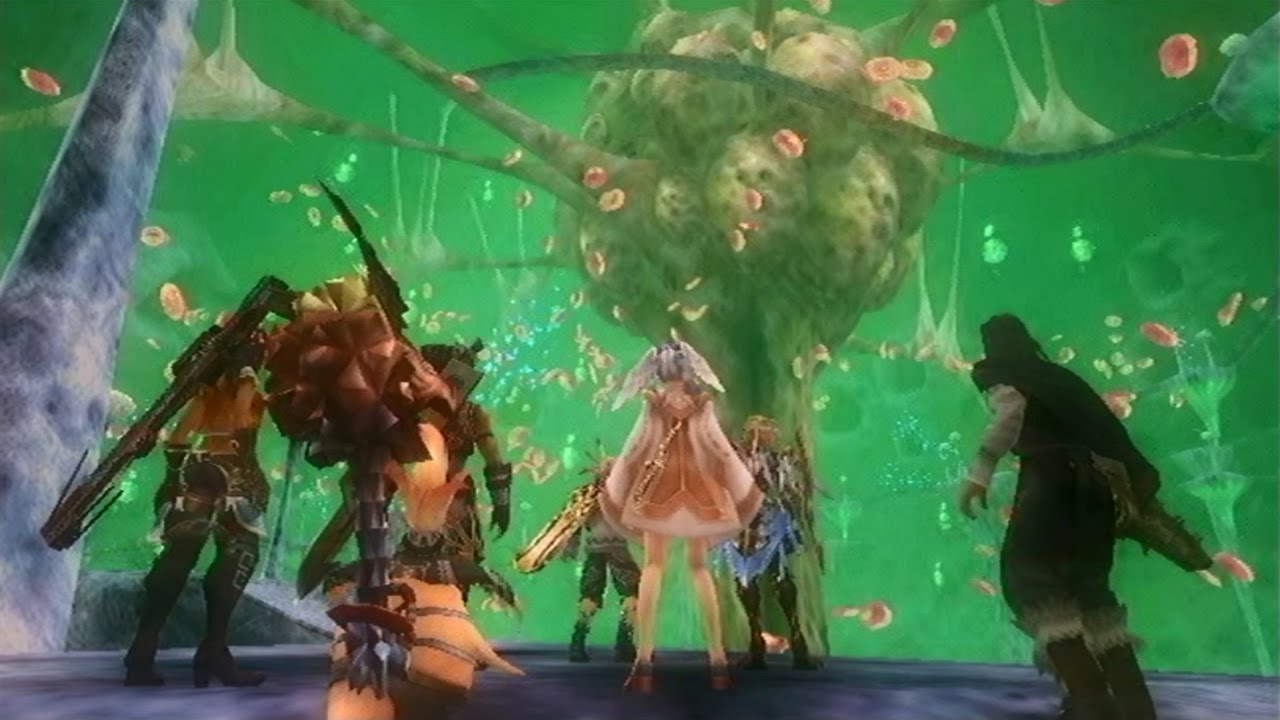 Yes, that’s a giant heart surrounded by artery land bridges, blood cells the size of office buildings, ether waterfalls, and semi-transparent living enemies. And you can explore all of it.

After a few hours of melodrama and philosophy, Xenoblade finally gets back to what it does best – exploring the impossible. Bionis’ Interior is a pastel-and-aqua tour de force. It’s unnerving, with that beating heart making you question if you’re hearing the game or if your own chest is about to explode. It’s also dangerous. Yes, you can traverse those artery bridges, but you are likely to be cornered by a high-level Telethia patrolling the area and knocking you down to your death (allies inflicted with confuse routinely walk off ledges). Those bridges are also quite easy to get lost on, as they intersect and bisect in ways that suggest a map designer sneezed while pressing “save.” Sadly, what you first see when you walk in the door is pretty much all that you get here. Unlike Xenoblade’s other large areas, which contain interesting terrain to explore, the Bionis’ Interior is almost entirely thin, pink artery bridges covered in cilia. Don’t get me wrong, I like it. I appreciate the scale and imagination, and it was absolutely necessary to get some time in walking around a giant area again, uninterrupted by cut scenes. But I don’t think it’s giving this section short shrift to say that the imagination of the design carries the day here more than the fun factor of navigating the area. Still, how can I argue when I really feel like I’m in the chest of a giant god?

The boss fight is, of course, within that heart. And it’s a doozy. The arena for this encounter is surrounded by a bile-y ether liquid that will quickly drain your party’s health. Your foe? Lorithia, a traitor of the High Entia riding a giant Telethia (that will often push you into the ether) that happens to be Melia’s brother. This might have been the only boss that made me want to throw my controller. The environmental damage is truly punishing. Victory opens up a black rip within the heart of Bionis – the portal to Prison Island.

It has changed a bit since last time. It’s darker, crawling with more dangerous foes, with new areas opened up. Prison Island would feel like a simplified, Gothic Zelda dungeon, were it not for the Battle Arena in which Dickson tosses a boss rush at you. The combat system I once bemoaned sings here; the non-blockable damage you take in these battles makes for a delicate balancing act of using arts without painting an aggro target on your face. Conquering these foes gains you the honor of…facing another boss. A Dragon. A Dragon King. I admit that I lucked out here. I’ve read plenty of comments of people getting stuck on this boss. I beat it on my first try, although every party revive was nearly a game-over experience.

I took a detour to Satorl Marsh, back to my favorite area to do some exploring and questing. After so much plot, it was refreshing. The pace of Xenoblade’s back half is exhausting; the storyline is doled out in heaping helpings. It’s compelling, and I couldn’t look away, but this break was needed. Just look back at the past few entries – there is so much narrative jam packed into a few dozen hours that it’s easy to forget that you could jump away anytime you wanted to a place like this, or Makna, or Eryth Sea. I found new areas, took on monsters I wouldn’t have dreamed of attacking before, and drank in the haunting fog. To be honest, it felt bittersweet. This was goodbye. I knew that when I went back to Prison Island to fight Dickson, I couldn’t come back.

And so it was. With a helping hand from the party, Shulk lands a critical blow. In the moment of the final reckoning, Dickson delivers the ultimate troll: “This martyr stuff’s not for me.” With a wave of his hand, he walks away to die alone. Shulk, briefly pausing, weeps for the man he once considered a father figure. On any other day, it would be an occasion to mourn. But on this day, there is a nether world, between time and space, where the boy who died will meet the order behind it all.

The god of creation is waiting.